PhD training, postdoctoral research and science diplomacy will be the focus of new cooperative efforts under a new agreement between TWAS and India’s top science agency. 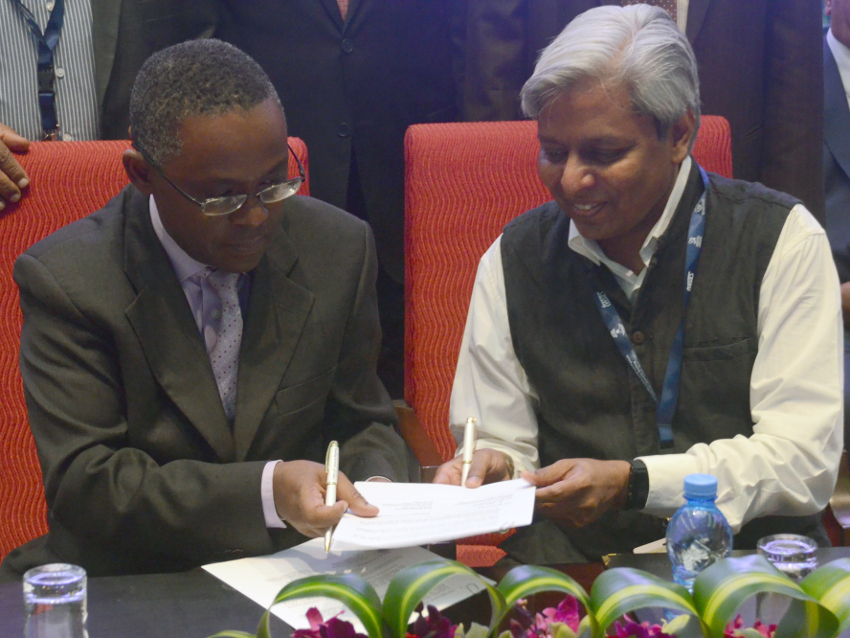 MUSCAT, Sultanate of Oman – India and its Department of Science and Technology will provide TWAS with USD1 million over the next five years as part of a major new agreement to support cooperative efforts in PhD education, postdoctoral training and science diplomacy.

Under the agreement, the Department (DST) and TWAS will embark on an ambitious new programme of science diplomacy training and events both in India and in Trieste, Italy, where TWAS is based. In addition, the agreement provides for DST and TWAS to work together on a Pan-Africa Doctoral Fellowship programme for about 100 fellowships over five years, with funding from DST.

The “programme of cooperation” agreement was signed Sunday in a brief ceremony during the 25th TWAS General Meeting in Muscat, Sultanate of Oman. The programme will be known as Partnerships for Inspiring and Empowering Next Generation Scientific Talent (PIE-NGST).

“We regard this as a very important initiative, an investment in the future, and we look forward to a very productive partnership,” said Sadhana Relia, head of DST International Multilateral and Regional Cooperation (Division I). "India continues its journey of increasing its share in the pie of TWAS scientific affairs devoted to the cause of the developing world.”

“India and TWAS have had a long, historic partnership that has produced great benefits for science and the developing world,” said TWAS Executive Director Romain Murenzi. “We are honoured to be part of this agreement with our Indian colleagues, and I am confident that this new agreement will yield very valuable dividends.”

The agreement was signed by Murenzi and DST Secretary Krishnaswamy VijayRaghavan.

According to the document, the new partnership will help both sides pursue their common values: “building scientific capacity and excellence for strengthening collective self-reliance in science, resolving critical issues in pursuit of scientific research and catalyzing socio-economic development among developing countries.”

The partnership between TWAS and India dates back to TWAS’s founding in 1983. Of 42 founding fellows, 12 were Indian – making India the single biggest national contingent among the Founding Fellows who worked with Pakistani Nobel laureate Abdus Salam to establish the Academy.

Over the years, the partners have shared a common vision of building healthier and more prosperous societies in the South through science and technology. India has made significant contributions to the TWAS endowment fund. Today, TWAS works in partnership with Indian research centers to offer a range of PhD and postdoctoral research fellowships to early-career scientists from the developing world.

The new DST-TWAS “programme of cooperation” establishes initiatives in science diplomacy and research training, areas of special interest for both partners.

Science diplomacy: Under partnerships with the American Association for the Advancement of Science and the Swedish International Development Cooperation Agency (SIDA), TWAS is emerging as a hub for science diplomacy training for the developing world.

Science training for Africa: The agreement provides for TWAS and DST to join in a “Pan-Africa Doctoral Fellowship” for about 100 fellowships over five years for early- career African scientists, with funding from DST.

Science capacity-building for India: TWAS and DST would support a range of activities focused on India and South Asia: regional scientific meetings; a high-level lecture series to engage the public in emerging science issues; and expanding the network of TWAS-affiliated centres of scientific excellence, especially in South and Central Asia.

In addition, TWAS would facilitate the placement of about 200 fellows from DST’s talent-building INSPIRE programme – 100 postgraduates, 75 PhD scholars and 25 postdocs – at world-class research institutions in developing countries to enhance their international experience.