The importance of the Higgs Boson discovery

Fernando Quevedo (TWAS Fellow 2010), director of the Abdus Salam International Centre of Theoretical Physics (ICTP) in Trieste, Italy, in an article in our recent TWAS Newsletter, describes the importance of the exciting discovery this summer of a Higgs-boson like particle – and the early role played by Abdus Salam, founder of both TWAS and ICTP. 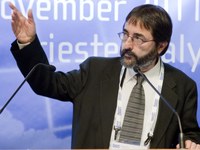 The announcement of the discovery of a new elementary particle with the properties of the long-searched for Higgs boson on 4 July 2012 at the European Organization for Nuclear Research (CERN) auditorium, was one of the most important announcements to be made in physics in the past decades. The great excitement in the community of experimental and theoretical high-energy physicists is not easy to explain to non-experts.

Yet important steps towards this important discovery were made by the founder of ICTP and TWAS, Abdus Salam, for which he was awarded the 1979 Nobel Prize in Physics, along with Sheldon Glashow and Steven Weinberg, "for their contributions to the theory of the unified weak and electromagnetic interaction between elementary particles, including, inter alia, the prediction of the weak neutral current."

Salam and Weinberg anticipated the existence of this particle, though it is named after the British professor Peter Higgs, who first identified the general class of particles. Higgs and a handful of other theoretical physicists discovered the general mechanism for which the Higgs bosons are responsible for endowing other particles with mass. The particle just discovered seems to be the particular Higgs boson predicted by Salam and Weinberg, using the general mechanism of Higgs and others, in their model describing the electromagnetic and weak interactions.

Bosons in general were named after the great self-taught Indian mathematical-physicist Satyendra Nath Bose, who, together with Einstein, described their behaviour. It is clear then that scientists from developing countries - including Salam, from Pakistan, and Bose from India - have made fundamental contributions to theoretical physics.

The Higgs particle was the only missing particle needed to confirm the Glashow-Salam-Weinberg model of electromagnetic and weak interactions, one of the two cornerstones of the standard model of elementary particles. Its discovery marks a turning point between established physical knowledge and new physics. All new particles to be discovered from now on will indicate the existence of new physical principles.

Quevedo attended the seminar at CERN on 4 July, and the announcement was also broadcast live at ICTP. He said, "It was a once-in-a-lifetime privilege to be physically present and to share the excitement with the hundreds of other scientists who have been closely following the experiments at CERN. The discovery is, indeed, exciting for all of humanity. It represents the product of efforts by researchers, engineers and technicians from all continents working together for a common cause. It is also significant because it unites theory with experimentation."

Quevedo goes on to state in the Newsletter article that "the discovery of a Higgs boson-like particle is a major triumph in uncovering the basic laws of nature which, although it may not lead to direct short-term applications, it does increase our understanding of nature and the early universe. It highlights the pure value of scientific research and the great excitement in the community illustrates that this is the real reason most physicists dedicate their life to this noble endeavour. Let us hope this is only the beginning of a new era of discoveries led by the LHC experiments at CERN."

To read the complete article by Fernando Quevedo, please see The Higgs boson discovery in the latest issue of the TWAS Newsletter.