With 9 billion people to feed by 2045, modern biotechnologies should focus on agriculture, insect control and the environment to increase crop yields, to obtain more nutritious food and to ease women's work. This was the message delivered by Segenet Kelemu, the director general and CEO of the International Centre of Insect Physiology and Ecology's (icipe) in Nairobi, Kenya, at the annual Trieste Next science festival.

Kelemu, an influential African science leader, was one of the three panelists in a roundtable organized by TWAS and titled "Ask Africa - Can agribiotech make a difference for developing countries?" In Africa, she explained, 50% of farmers are women, and they carry out most of the hard, physical farm work. Modern biotechnology could change their life for the better, she said.

Kelemu was joined on the panel by two Italian scientists: Michele Morgante, professor of genetics at Udine University, and Alessandro Vitale, a plant molecular biologist from the Italian National Research Council's Institute of Agricultural Biology and Biotechnology (IBBA-Consiglio Nazionale delle Ricerche). There they discussed with the audience the need for food production and the safety of genetically modified organisms (GMOs).

The event on 25 September was hosted in the historic Palazzo of Lloyd Triestino, in Piazza Unità d'Italia, where the Regional Offices of Friuli-Venezia Giulia are headquartered. More than 100 people filled the hall, and other 150 followed the debate from mega-screens set up in the hallway. Italian journalist Alessandra Ressa served as moderator for the discussion. 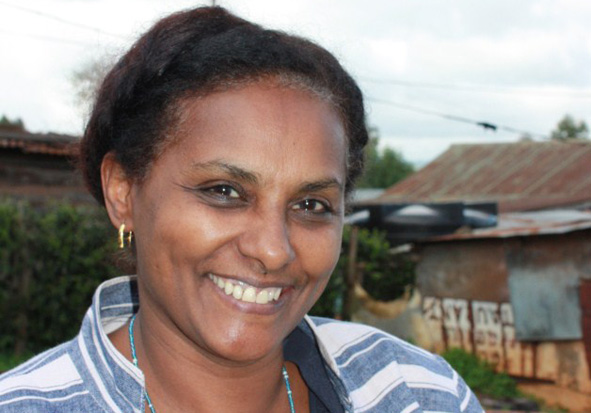 Assessore Cristiano Shaurli, from Regione Friuli Venezia Giulia, offered remarks to open the roundtable, reminding the audience of the importance of researchers. He urged the audience to "... trust scientists and rely upon them" because the world needs to produce more food and better products.

Assessore Antonella Grim, from Comune di Trieste, praised at the initiative and, in particular, the subject of the roundtable. She mentioned that TWAS is one of the partners in the Trieste System, recalling the Academy’s role as the driving force for science in the South.

The roundtable highlighted why agribiotech and GMOs are important tools to increase food availability for a world’s growing population. It also addressed the fact that GMOs fuel mixed feelings among the public at large, more than 40 years after their first use.

GMOs, the three speakers noted, are already part of our world and of our diet. They have been tested, cultivated and marketed for more than 30 years. Still, there is a mixed perception about their safety: those devised for medical purposes are, in general, well accepted by the public opinion.

But when it comes to their use in agriculture, people tend to be skeptical or afraid and to ignore extensive scientific data that confirms their safety. Besides, new varieties are in the pipeline that could resist climate change and help feed people where the scarcity of food is a problem.

The audience was deeply engaged by the topic, and several people raised questions about the potential threat of biotechnology in agriculture, in developing versus developed countries, to humans and to the world’s biodiversity.

The discussion brought to the table a full spectrum of scenarios where scientists reasoned with the public about possible alternatives to the use of GMOs.

Kelemu was born in Ethiopia and spent time in the United States and Colombia before moving to Nairobi, Kenya, to become the first woman to lead icipe. She has been extensively honoured: winner of the 2014 L’Oréal-UNESCO for Women in Science Award for Africa and the Arab States, elected to the African Academy of Sciences in 2013, recipient of the 2011 TWAS Prize for Agricultural Sciences. In opening the panel, she shared with the public in Trieste important insights on the role of agricultural biotechnology, in Africa and elsewhere.

"For the past 50 years, sub-Saharan Africa has not met the goal of feeding its people. If the Sustainable Development Goals and other related goals are to be met, African agriculture must undergo a major transformation," said Kelemu. 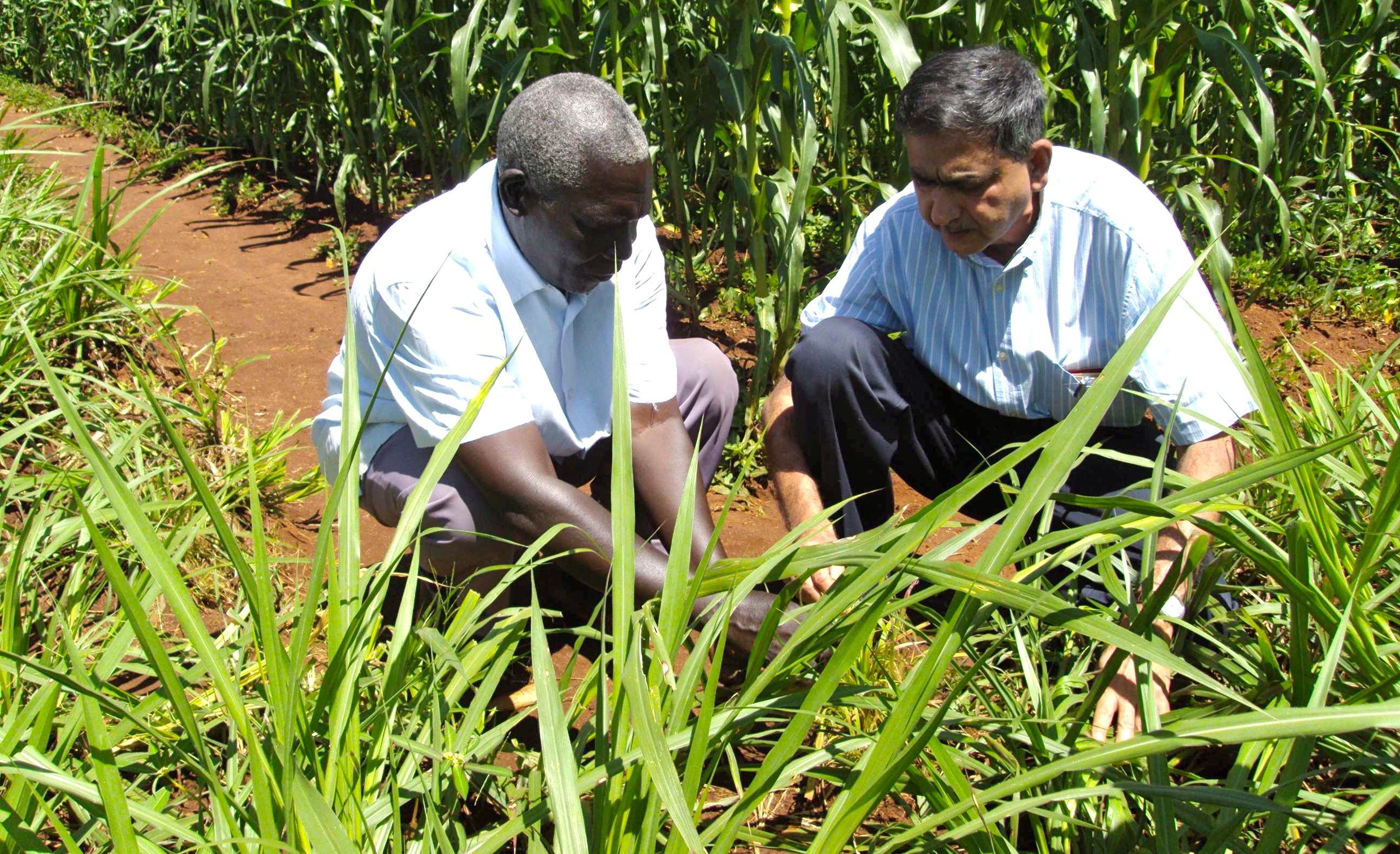 In Africa, she added, 40% of the crop produced is lost after harvest, much of that  to insects. This loss exceeds the food aid given to Africa by the rest of the world.

Morgante added his point of view: “We need to produce more, keeping plant stress at low levels. To produce more we need to control insects that play a crucial role in our agricultural system, but also abroad. At the same time we need to exploit the benefits stemming from genetic ameliorations of important commodities such as rice, maize, soy, as well as from any other available strategy.”

A novel approach to sustainable agriculture

Talking about important transformations in African agriculture, Kelemu – who served as the vice president for programs at the Alliance for a Green Revolution in Africa – explained the strategy that she is pursuing at icipe.

“At icipe we focus much on indigenous plants as natural crop protectors," she said. "We are teaching farmers the climate-resilient push-pull technology for the control of weeds and pests.” The technique was devised a few years ago by icipe scientist Zeyaur Khan, in collaboration with Rothamsted Research, United Kingdom, and other partners in Eastern Africa. (Khan was elected a TWAS Fellow in 2014.)

Push-pull uses two naturally occurring plants to protect crops that are important sources of food in Africa. The “push” plant is Desmodium; planted inside the field that needs protection, it naturally releases volatile chemicals that repel insects. The “pull” plant is Brachiaria, which is planted around the border of the main crop to attract the same insects with its compounds.

Once the insects are attracted towards the field limits, they lay their eggs but the plant doesn't allow them to hatch, thus preventing their full development. This is an elegant system to control pests – and tackles five major constraints in Africa.

As Kelemu explained, this simple cropping strategy not only fights insect pests (stemborers). It also prevents the growth of the parasitic weed Striga (and other weeds), increases soil fertility by fixing 160 kg of nitrogen per hectare, helps soil moisture management, and provides high-quality forage for local cows.

Healthier cows make better dairy products like milk, and human health is likely to improve because of high-quality milk. “Besides," Kelemu added, "it is a women-friendly technique. Women do not have to bend any more over fields to weed, and do not have to walk long distance searching for forage.”

As the audience learned, the technique has already been adopted by 111,000 farmers in several African countries, and scientists at icipe hope it will be shared within three to five years by 1 million farmers in Africa. In addition, they have already adapted the technique for climate change, using plants that are drought-tolerant.

But moderator Ressa pointed out that natural solutions are just one side of the coin. On the other side are genetically engineered organisms (GMOs), modified to resist both the insects' assaults and the noxious effects of the herbicide used to prevent weed growth. Their use is much debated, especially in Europe, where there are concerns over their safe use both as food and in open fields.

“Unfortunately, Italy has banned open fields with GMOs, but this prevents scientists from testing to verify their safety,” said Vitale. “Many people opt for biological food, lured by the adjective bio- that sits on top. They think that biological food is safer because it seems more natural. They are not aware that GMOs undergo many more controls than biological food before they are marketed.”

As Kelemu observed, GMOs have been consumed safely for at least 18 to 20 years. We all eat products that may contain some sort of GMO, said the icipe director, like corn flakes, hamburger and others. And to date not a single food incident has been reported from eating GMOs.

“We should not suggest that GMOs are potentially dangerous just because of the technique that allows gene manipulation. This creates false prejudice,” said Morgante. “We’d rather focus on the final product. That should be evaluated for its safety.”

"The technology is already here to stay, and it is surprising how the debate doesn't include medical drugs (like insulin or growth hormone) that are produced with recombinant techniques," Kelemu said. She then mentioned that GM crops undergo strict control process, more than other crops that are not produced with genetic engineering.

If the risks for human health are under control, some concern still remains about the possibility that GMOs jeopardize natural biodiversity.

"When we choose to grow some plants instead of others, and to fight weeds and insects with chemicals, we already put some constraints on nature," observed Alessandro Vitale. "When we examine the food issue we address a complex picture."

Genetically modified crops cover today 174 million hectares. Some 18 million farmers use GM plants worldwide and GM soy fields represent 79% of all the cultivations. "Soy is essential," added Vitale, "as it feeds cattle. People want to eat more meat, but we need to feed all those animals and only GM soy can help us meet the demand."

Insects are another part of the challenge. Many insects worldwide are noxious, but many others are essential for crops' health. Scientists like Kelemu and her teams are working to spot beneficial insects while keeping others at bay.

"Icipe is credited to tackle insects because insects are important, in our lives, in agriculture, as beneficial pollinators," said Kelemu. About 70% of food requires pollinators like bees. If bees disappeared, she added, most of the food we enjoy today will not be present tomorrow.

But insects like mosquitoes transmit diseases like malaria, dengue and yellow fever; they kill more people annually than all the human conflicts combined, noted Kelemu. "They also play a critical role in food: 2 billion people consume insects as high-quality protein source," said the scientist. "That's why at icipe we are committed to investigate their role. We believe that we are making a difference."

Morgante, an expert on maize genome, echoed that point. "Scientists know how to investigate the complex interactions between genes and environment, and genetic engineering is one of the tools we know better how to use to fight insects that reduce the yield."

The importance of sharing correct scientific communication with the public at large was the final topic addressed during the roundtable. As Kelemu observed: "Also in Africa we have mixed feelings about GMOs. There is the myth that GMOs cause sterility. Of course this is not true.

"I think that we, the scientists, should improve our communication," she added. "The general public doesn't read our articles, that's why we have work with journalists, because policymakers read the newspapers and from newspapers people can learn. DNA is DNA, no matter its source, and when we use it to modify plants that's for the benefit of many people."

Tags:
Trieste Next 2015
Segenet Kelemu
Michele Morgante
Alessandro Vitale
GMOs
push-pull
agribiotech
agriculture
Africa
biotechnology
icipe
Your subscription could not be saved. Please try again.
Your subscription has been successful. An e-mail with a link has been sent to confirm your subscription.
This website does not use profiling cookies, but only first and third party technical cookies, including cookies from social media plugins.
To learn more about our cookie policy or to change your cookie settings, click here.
By using this website and clicking “accept”, you consent to the use of cookies in accordance with our cookie policy.Accept